Nobody Panic! (Review of My First Castle Panic) 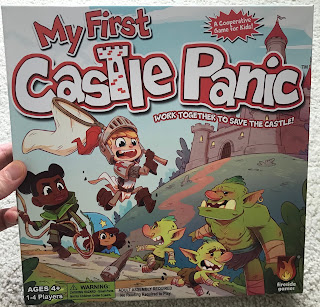 While the extrovert in me is suffering from being cooped up inside for the last several weeks, I'm taking this time to indoctrinate introduce my children into the board game hobby. My girls are four (Winnie) and almost seven (Ardyn) and we actually have played lots of games together. Their favourites are Lemonade Shake Up, Raccoon Rumpus, and Richard Scarry's Busytown: Eye Found It! Game (who names these things???).  With my eldest daughter being almost seven, I wanted to start turning the corner into older games, so for Christmas I picked up My First Castle Panic. This is a (very) scaled down version of the regular Panic Attack (which I've reviewed here and played through here). I have games in my collection that have surpassed Castle Panic as a solo or cooperative game, but it's still a mainstay on my shelf as my wife enjoys playing it and it's still a solid and quick to set up solo experience. I went for this simplified version for the girls' gift because it is (a) cooperative, (b) a fantasy setting, and (c) age appropriate for both of them.
Read more »
Posted by Theo Peters on April 02, 2020 No comments:

Email ThisBlogThis!Share to TwitterShare to FacebookShare to Pinterest
Labels: reviews

If you're an avid visitor to the 1 Player Guild on BoardGameGeek, then you're probably aware of SGOYT. If not, it's an acronym for Solitare Games on Your Table. It's a monthly podcast on the guild where people can post about their solo gaming adventures. It's a great place to see what's hot and to find some hidden gems as well.

For April, my birthday month, I am hosting SGOYT for the first time! Basically, that means I write a little bit about myself and give away some geekgold if you include a comment related to my them (rebirth) in your post. Or, you can totally ignore me and I'll still like your comment and give you some geekgold if you make me giggle. Check it out here.
Posted by Theo Peters on April 01, 2020 No comments:

Just like many of you around the world, I have been cooped up at home for most of the last week or so. I’ll admit, it’s been nice working from home (although teaching grade fours solely online is going to have its challenges) and being with my family full time. That being said, I know this is a very tough time for many people. My heart and prayers go out to the families of those who have lost their lives or jobs or are running into others difficulties. I hope that by standing together as people across the globe, we can slow this thing down and give our scientists and doctors a chance to fight this thing.

Being stuck in the house has given me a good opportunity to get some solid solo gaming in. We’ve played a few family games - my girls (4 and 6) especially enjoy My First Castle Panic and our storytelling cards - but I’ve spent most of my “me” time in my board game nook (my Bud Hole - please watch The Good Place). 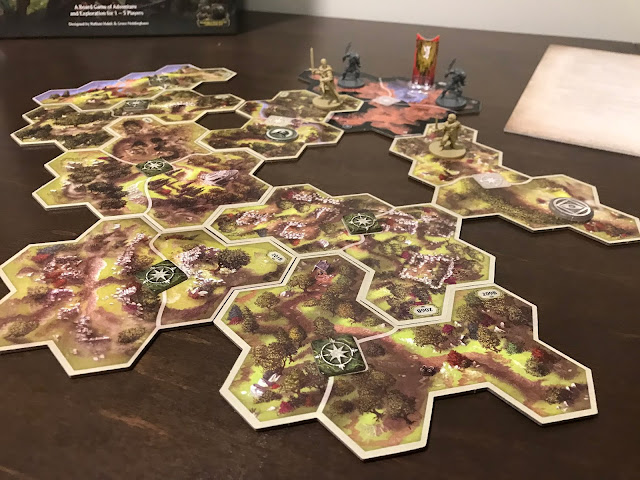 Not All Who Wander Are Lost (Playthrough of The Lord of the Rings: Journeys in Middle-earth)

In the years separating the adventures of The Hobbit and The Lord of the Rings, 60 years to be exact, not much is known about what when. It's entirely possibly, or maybe, somewhat possible, that some of our favourite literary characters traveled together around Middle-earth. Alright, maybe not exactly possible, but not entirely impossible, either. However you want to frame the likelihood of such an event, following is one of those untold stories.

Bilbo, before finally settling down in Rivendell, travels into the lands nearby, where rangers roam. He meets up with one particularly well known ranger, one named Strider. Together, they seek to track down some thieves who have been stealing from Bree and the surrounding areas. As they begin following the clues left behind by the criminals, they were assaulted by one of its members. Strider makes quick work of this ruffian. 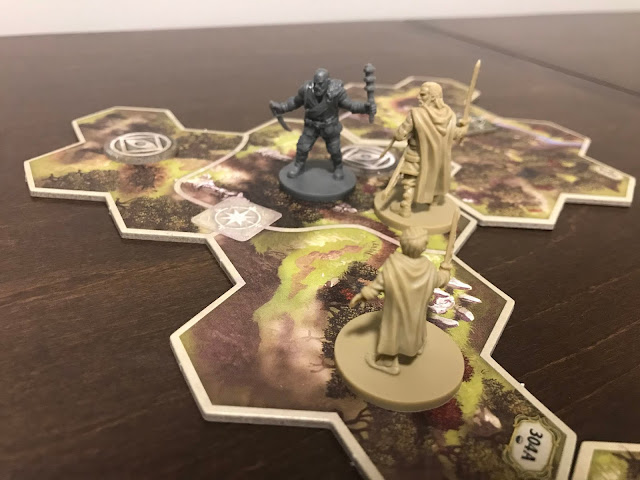 Email ThisBlogThis!Share to TwitterShare to FacebookShare to Pinterest
Labels: playthroughs

Most Anticipated Non-Kickstarter Games of 2020 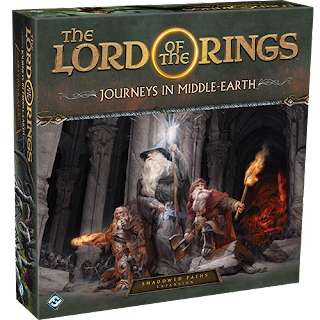 The Lord of the Rings: Journeys in Middle-earth - Hunt for the Ember Crown - Ok, seriously people, is there anyway that we can abbreviate this a little bit? The base game has nine words in the title already and this bumps us up to fourteen. Isn't that like a marketing no-no? Whatever, it still won't stop me from picking this up. Journeys in Middle-earth (check out my review here) was almost the game I've always been waiting for. There were a few things about it that I would have liked to see differently, but I'm still excited to get more content for this one. The miniatures look amazing and, come on, who doesn't want to play as Gandalf?!? Also hat new dwarf looks pretty cool (and you know I'm going to run a purely dwarf team, obviously). Mirkwood is a really interesting and iconic location in Middle-earth so I'm excited to see what kind of trouble we can get up to in there. This one is a must-buy for me.

Most Anticipated Kickstarter Games Launching in 2020

Alright, I'm definitely a little behind on this one because at least one of these games I'm anticipating is live right now. So, I'll start with that one and go from there.

Heroes of Tenefyr - the base game was Kickstarted last year, I believe, and while I didn't get my hands on the whole game, they did have a free print'n'play that I thoroughly enjoyed. You start with a deck of awful cards (as per every deckbuilder ever made) with a special card based on the hero you've chosen. You progress through increasingly difficult dungeons and as you defeat enemies, you rotate the card and add it to your deck (similar to Friday and Goblivion). There's a push you luck element to this game that's different from most deckbuilders, though. During a fight you draw three cards (possibly more based on card powers). Between you and your other heroes (controlled by you or other players), you need to surpass the fight strength of that enemy. Well, if you don't draw a good enough attack with your three cards, you can draw again. And again. As many times as you like. Beware, however, because once you've drawn all the cards in your deck, you become exhausted and must exit the dungeon. Doing this uses up precious time because the big, bad boss is approaching (check out my full review of the print and play here).
Read more »
Posted by Theo Peters on March 09, 2020 No comments:

Dial 3-1-1 for a Ridiculous Score (Clank! Expeditions:Temple of the Ape Lord)

I received the Temple of the Ape Lord expansion for Christmas, but this weekend was the first chance I had to play it. In fact, I think this is my first solo game of 2020...yikes...


Anyway, this expansion is not officially covered in the app yet, and I could tell that it, at least the jungle side, was not balanced for solo play. 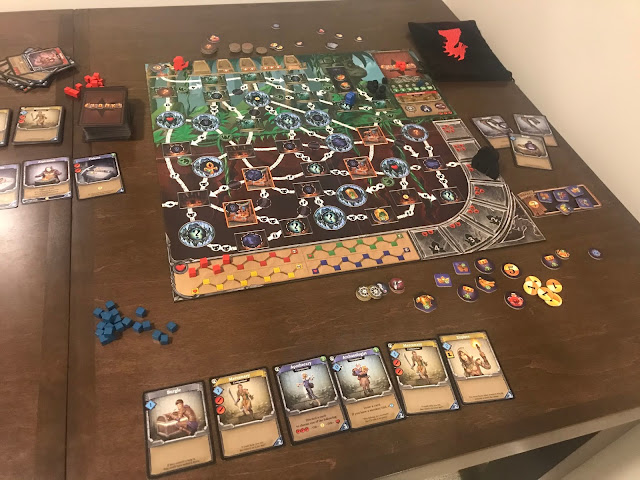 Email ThisBlogThis!Share to TwitterShare to FacebookShare to Pinterest
Labels: playing

It was my baby's fourth birthday on the weekend. Does it make me sound old to say that I can't believe how fast the time has gone? It was a very fun, teddy bear themed birthday weekend, but Sunday night ended with Logan and Jenn (brother- and sister-in-law) staying after the kids were in bed. Logan and Sharayah got into a deep conversation, so I looked through the games they brought and forced Jenn to teach me one of their newer ones. 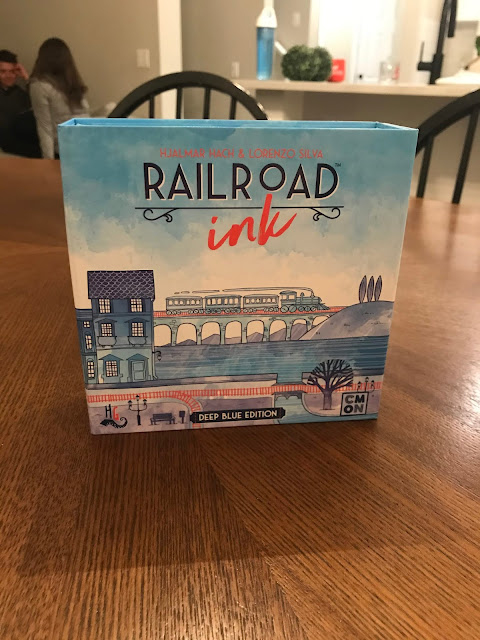 Email ThisBlogThis!Share to TwitterShare to FacebookShare to Pinterest
Labels: playing

Most Anticipated Kickstarter Games Being Delivered in 2020

I guess we're already a little bit into 2020 now and so this is a little late in coming, but it seems like everyone is thinking about the top games for this year. There's a giant (and I mean giant) poll you can take on BoardGameGeek for your most anticipated games (I tried filling it in twice and both times got overwhelmed by the sheer number of choices and gave up). To be honest, I've been spending so much time working on my own board game that I haven't spent as much time looking ahead to new games as I usually would at this time. That being said, there are still some games I cannot wait for!

Dinoblivion - this comes to us from the same designer as Goblivion and is a sequel of sorts. It is a 1v1 or solo deckbuilder, but with some newly added elements. I'll be honest, I haven't looked really closely at the differences, but this was an instant back for me. Goblivion was my surprise game of 2019 (it rose to be my second favourite solo game). You can find my full review here and two playthroughs here and here. Jean-Francois, the wonderful mind behind Goblivion Games, is also a stand-up guy. I actually had a video conference call with him last week to get some advice on Kickstarting a game in Canada. He gave me a lot of great ideas and if my game funds later this year, he deserves credit for his insights. This game is due in June and according to Jean-Francois, everything is running smoothly. It'll be here just in time for some summer gaming!

Most of my gaming is pretty thematic. I like games with stories, characters, choices, things that really make you feel invested and engaged in the game. On Valentine's Day I had the chance to fall back in a love with a very theme-less game: Blokus. I took my daughter to a local cafe and they had a copy for us to play. It was a good reminder that if you're not playing a solo board game, the theme might not matter as much if you have someone great to play it with. This inspired me to do a little review for Blokus and hopefully expose new gamers to the game or help some of you veterans to fall in love again as well. 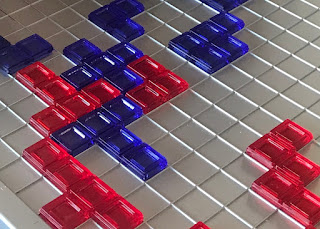 What is Blokus? Basically, it's a block laying game. You have a variety of different sized blocks (very Tetris-like) that you are trying to play on the board. Your opponents are attempting the same thing. The catch - there isn't enough room on the board for everyone. Also, you cannot play one of your pieces in a way that any edges touch the edge of another of your pieces. However, you must play it so it is touching at least on diagonal of another of your pieces. So you need to try and find ways to fit your pieces in close to yours and between your opponents.
Read more »
Posted by Theo Peters on February 18, 2020 No comments: 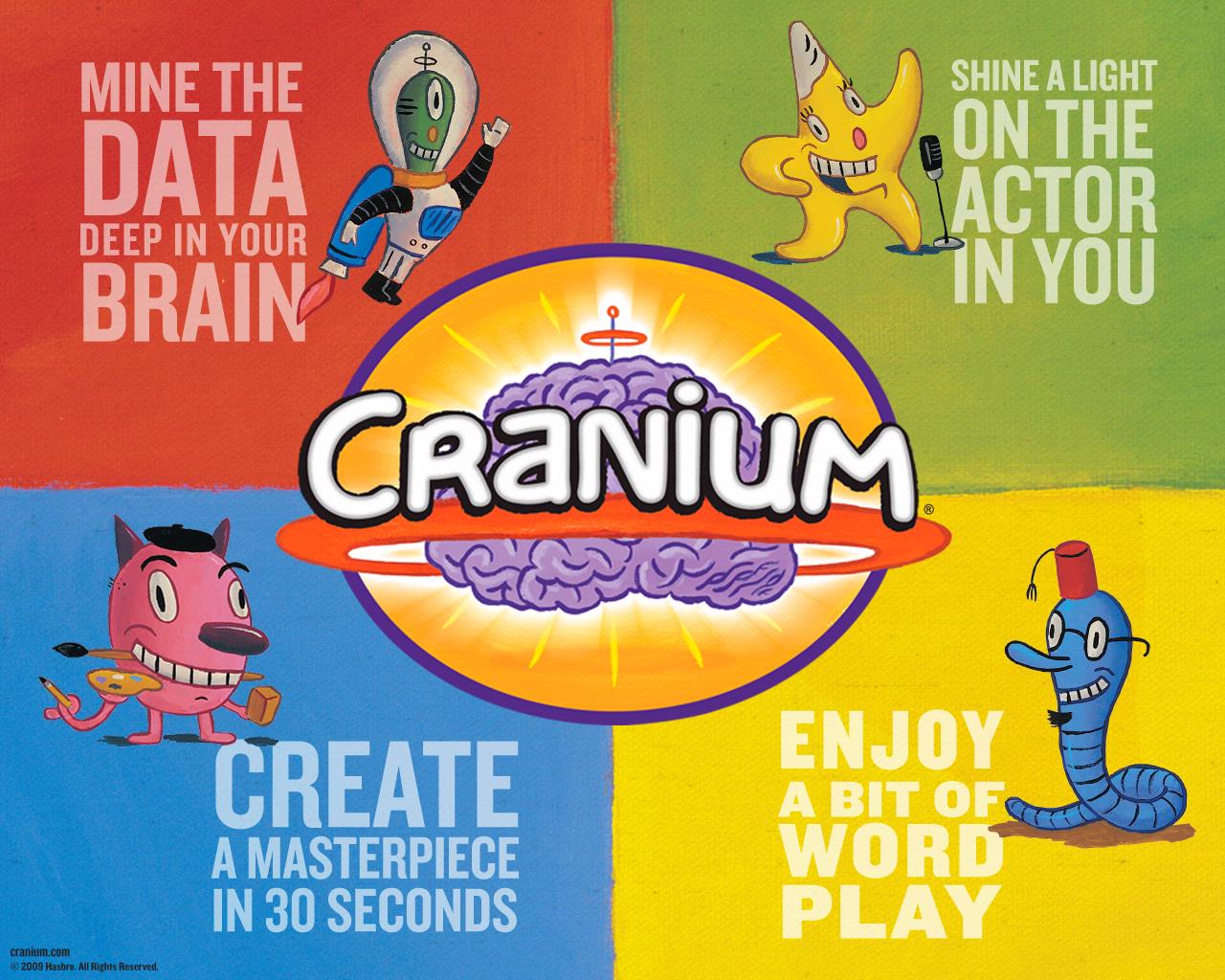